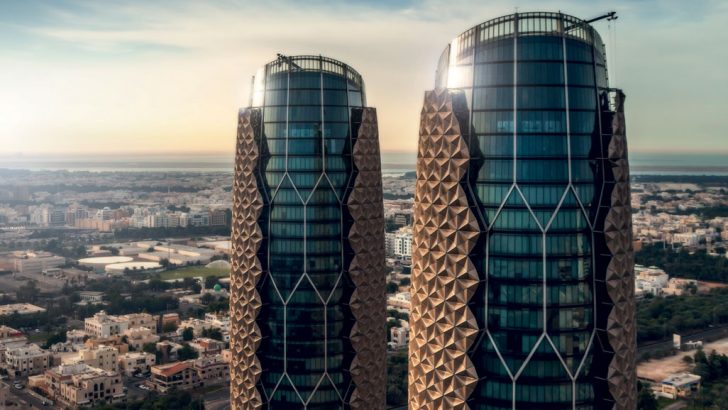 A quick glimpse at the upcoming weather for Abu Dhabi will show a week of intense sunshine, temperatures steadily above 100 degrees Fahrenheit with 0% chance of rain. In such extreme weather conditions, even architects listing environmental design as their top priority are up against a tough battle. Never mind that the sand can compromise the structural integrity of the building, the intense heat and glare can render a comfortable indoor environment relatively impossible if not properly addressed. For Abu Dhabi’s newest pair of towers, Aedas Architects have designed a responsive facade which takes cultural cues from the “mashrabiya”, a traditional Islamic lattice shading device.

More about the towers’ shading system after the break.

Completed in June 2012, the 145 meter towers’ Masharabiya shading system was developed by the computational design team at Aedas. Using a parametric description for the geometry of the actuated facade panels, the team was able to simulate their operation in response to sun exposure and changing incidence angles during the different days of the year.

The screen opperates as a curtain wall, sitting two meters outside the buildings’ exterior on an independent frame. Each triangle is coated with fiberglass and programmed to respond to the movement of the sun as a way to reduce solar gain and glare. In the evening, all the screens will close.

“At night they will all fold, so they will all close, so you’ll see more of the facade. As the sun rises in the morning in the east, the mashrabiya along the east of the building will all begin to close and as the sun moves round the building, then that whole vertical strip of mashrabiya will move with the sun,” said Peter Oborn, the deputy chairman of Aedas.

It is estimated that such a screen will reducing solar gain by more than 50 percent, and reduce the building’s need for energy-draining air conditioning. Plus, the shade’s ability to filter the light has allowed the architects to be more selective in glass finished. ”It (the screen) allows us to use more naturally tinted glass, which lets more light in so you have better views and less need of artificial light. It’s using an old technique in a modern way, which also responds to the aspiration of the emirate to take a leadership role in the area of sustainability,” added Oborn.

For the project’s sustainable engineering and sensitive cultural and urban approach, the towers were awarded the 2012 Tall Building Innovation Award (be sure to check out our previous coverage on the additional winners here) by the Council of Tall Buildings and Urban Habitat.

“The façade on Al Bahar, computer-controlled to respond to optimal solar and light conditions, has never been achieved on this scale before. In addition, the expression of this outer skin seems to firmly root the building in its cultural context,” explained Awards Juror Chris Wilkinson of Wilkinson Eyre Architects.

Such an award acknowledges the importance of the necessary integration of architectural form, structure, systems, and sustainable design strategies.