Zaha Hadid Architects has shared its design for the CECEP Shanghai Campus in China, which will utilise renewable energy technologies and recycled materials.

Developed for Chinese renewable energy firm CECEP, the mixed-use campus will be built in north-east Shanghai beside the Huangpu River, taking the form of three interlinked towers with leisure facilities and an urban park at its base.

The design has been led by Zaha Hadid Architects’ director Patrik Schumacher and encompasses a number of sustainable features that the studio claims will make it the city’s “greenest building”.

Campus will set sustainability “benchmarks for the city”

CECEP Shanghai Campus is the winning entry of an international competition held by CECEP, inviting architects to design a home for the company that reflected its ethos and work with renewable energy technologies.

Though it remains in the design phase, the campus is expected to achieve more than 90 credits in the Three Star Green Building Rating – China’s green building evaluation standard – which is the highest score for any building in Shanghai.

“The new CECEP campus in Shanghai has been designed to be the greenest building in the city with sustainability embedded into every aspect of its design and construction,” explained Zaha Hadid Architects.

“The 218,000-square-metre campus sets new benchmarks for the city in energy conservation, energy efficiency and sustainability,” the studio continued.

“The new project echoes CECEP’s commitment to environmental education by creating vital new public spaces for its staff and neighbouring communities to enjoy the natural world.”

The campus’ towers, revealed in the visual published by the studio, are imagined as a series of interlocking rings that are intended to reduce their visual impact.

Their massing was developed by the studio to optimise their orientation and building’s facade-to-floor ratios so that passive design principles could be integrated to limit energy consumption.

Thermal mass and external solar shading will be used for heating and cooling in tandem with waste-heat recovery systems. The thermal ice storage will produce ice during the night and then be used for air conditioning the next day – reducing energy demand during peak daytime hours.

Other key sustainable measures in the scheme will include the installation of photovoltaics on rooftops and as cladding throughout the campus, which will be connected to battery storage and an on-site micro-grid.

Rainwater harvesting will be used to irrigate expansive green spaces and landscaping throughout the scheme.

The materiality of the campus is yet to be disclosed, though Zaha Hadid Architects is committed to using recycled materials and prefabricated components in its construction.

Prefabricated elements will also be used and these will be manufactured locally in an effort to support the local economy and help to reduce the embodied carbon of the scheme.

As part of the project, Zaha Hadid Architects will also overhaul an existing industrial building on site built in the 1930s.

Named the Shanghai Minghua Sugar Plant, the riverside factory will be used as a space to host CEPEC’s education and community engagement programmes.

CECEP Shanghai Campus will be complete with an intelligent building management system. Reliant on a 5G network, it will automatically monitor and react to. changes in internal conditions such as temperature, natural daylight, or the number of occupants to help reduce energy consumption.

This system will also incorporate biometric security systems that will allow staff and visitors to enter the building without having to touch potentially contaminated communal surfaces.

Zaha Hadid Architects was founded by the late British-Iraqi architect Zaha Hadid in 1980. Today it is headed up by Schumacher, who recently contributed to the Virtual Design Festival as part the collaboration with Rosey Chan.

CECEP Shanghai Campus is the latest in a string of projects by Zaha Hadid Architects in China, following the proposal for OPPO Shenzhen headquarters and the completion of the Leeza Soho skyscraper in Beijing that features with world’s tallest atrium.

In Chengdu, it is also close to completing a white exhibition centre as part of a wider masterplan for Unicorn Island that is being developed to support the growth of China’s technology and research sectors.

Visual is by Negativ. 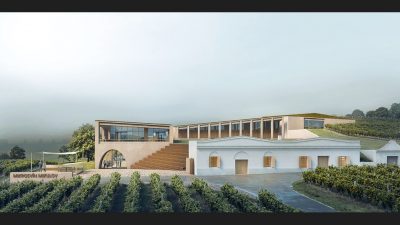 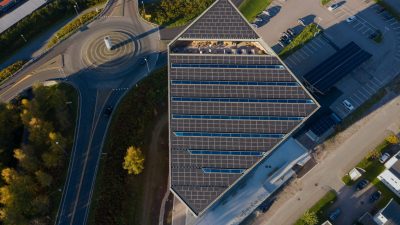