Snøhetta has completed the carbon-negative Powerhouse Telemark office in the city of Porsgrunn, Norway, which was designed to produce more energy than it will consume over its lifespan.

The angular building is highly insulated and has a large photovoltaic canopy covering its roof and south-facing facade that will generate 256,000 kilowatts of energy each year.

According to Snøhetta, this will mean it creates enough surplus renewable energy to compensate for the carbon consumed by the office over a 60-year lifespan – including its construction, demolition and the embodied-carbon of building materials Powerhouse Telemark is an energy-positive office in Norway

Powerhouse Telemark was designed by Snøhetta with R8 Property, Skanska and Asplan Viak, and is its fourth Powerhouse building, following Powerhouse Brattørkaia.

The Powerhouse buildings were developed in response to the climate crisis and the building industry’s contribution to global carbon emissions, with the goal of offering a “sustainable model for the future of workspaces”. It has a giant photovoltaic canopy that generates clean energy

“Architecture, as we see it, probably has the purpose of creating better environments for human and non-human existence on Earth,” said Snøhetta founding partner Kjetil Trædal Thorsen.

“There is no question that we, as a profession, have to deal with the problems, not challenges, real problems that we have at hand, at any time through our professional network and cross-collaboration,” he told Dezeen. The office has an angular and “clearly identifiable” form

“Powerhouse is a constellation of different companies that work with different clients in order to create a building that principally produces extensively more clean energy than it consumes,” Thorsen continued.

“What we’ve proven with this building is that there is no excuse for the building industry, not to build energy-positive buildings anymore. All the systems that are in this building are existing in the market.” Powerhouse Telemark is distinguished by its 11-storey, skewed form that features a steep roof angled at 24-degrees and a distinctive 45-degree-notch on its east-facing facade.

This provides the building with a “clearly identifiable expression”, helps to maximise the amount of solar energy the photovoltaic canopy can harvest and creates light-filled spaces inside. The building’s facades are highly insulated and clad in a mix of wooden panels that provide solar shading and Cembrit facade panels – a large fibre cement sheet.

Cembrit was chosen as it provides the building with a “density akin to that of a stone structure” – meaning it can store thermal heat during the day and slowly emit heat during the evening. This helps to passively heat and cool the building, in tandem with a system that uses geothermal wells dug 350 metres below ground. The building features a “barception”

Inside the office comprises a mix of different office spaces, alongside a “barception”, a shared staff restaurant, penthouse meeting spaces and a roof terrace.

A basement was not included to reduce the amount of concrete required for the project. The concrete walls are teamed with wooden furnishings

Among the office spaces are two storeys of flexible, co-working spaces that allow users to easily expand or downsize their workforce, and switch between working privately or collaboratively.

They are positioned in the angular, west and south-facing areas of the building that are brighter and have larger, open-plan arrangements.

Smaller and more traditional, enclosed workspaces are contained behind the building’s straighter facades, away from sun-exposed areas. Together, this layout reduces overheating and dependence on artificial cooling. A canteen was built on the angular side of the building

Powerhouse Telemark’s interior material palette is also designed to be as sustainable as possible, composed of a minimal palette of local wood, gypsum and carpet tiles made from 70 per cent recycled fishing nets.

These elements were designed to complement the building’s exposed “environmental concrete” structure – a type of concrete that uses less energy in its production and produces less carbon dioxide than traditional concrete. There are two-storeys of co-working spaces

The material palette, furnishings and fixtures are consistent and standardised throughout the office to reduce waste.

Meanwhile, artificial lighting is used at an absolute minimum, with windows incorporated throughout the bring light into the depths of the building.

Notable elements of the interiors include two large staircases that connect the building’s ground floor to its upper levels. There is also a straight, wooden staircase hidden on the ninth floor of the building that guides visitors up to the building’s roof terrace. More private work areas are housed on the north side

Snøhetta’s other Powerhouse buildings completed over the last decade are Powerhouse Kjørbo and Powerhouse Montessori.

The completion of Powerhouse Telemark follows Thorsen’s warning to architects that they must plan for “armageddon situations” and the studio’s pledge to only design carbon-negative buildings, meaning their projects will generate more energy than they consume over their lifetime.

“For the next 10 years Snøhetta will focus on turning our project portfolio carbon neutral in terms of all projects in the design stage,” the firm told Dezeen. “Within the next 20 years [we will] ensure that our built projects are carbon neutral.”

Photography is by Ivar Kvaal. 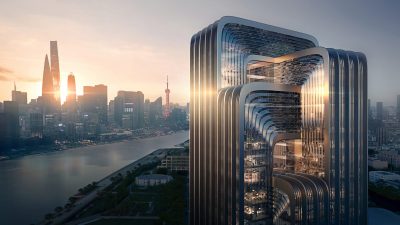